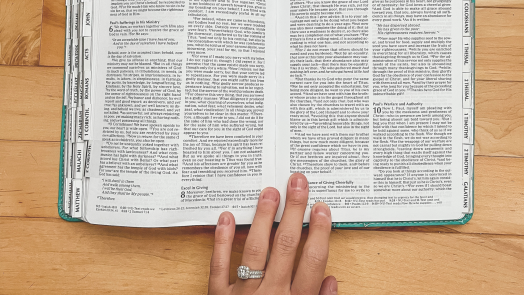 Some days when I sit down and decide I’m going to write, my mind goes blank. I have a really hard time thinking of what topic I want to cover, how I want to say things, and where I want the blog to go. Other days, the message is clear as can be and I have to stop whatever I’m doing and start ferociously typing before I forget about all of the thoughts that are rushing through my head.

The difference? I one hundred percent believe those two separate ways of creating content are either me doing it my way or God working through me. A lot of my blogs start with these deep thoughts that come at the most random times of the day and I feel so inspired I make notes or stop everything to start writing. And those blogs I believe are my best and most sincere.

And I’m not saying that some of the others are bad or unworthy. God doesn’t usually knock on my door for me to blog about running and kale salads. I enjoy talking about those things and I try my best to put the time and effort into each post. However, there’s something really different and special about blogs that I feel called to write.

This is one of those posts.

But first, let me say that I had a completely separate post typed out for today. I had read it over a few times. I spent SO much time trying to hack at my brain to dig the message out. It felt off. I was frustrated writing it. I was typing and thinking about how the words sounded sloppy and not well written. And today, I realized that that was not the post I was supposed to write.  And then the good Lord came in and reminded me why I do this in the first place.

This past Christmas, I thought about this story in a different light. I thought very deeply about the character of Mary and was actually totally blown away when I really put her position in the story into perspective.

Mary and Joseph were together. They were not married. I believe Mary was somewhere between thirteen and fifteen years old. Gabriel came down from heaven and told Mary she was going to be a mother to baby Jesus. I’m sure she was terrified, confused and completely blown away. But what else was she? Obedient. Now, think about that for a second. This young teenage girl who’s not married is told by an angel that a baby of God is going to grow inside of her for the next nine months. Like WHAT? I don’t know about any of the women reading this, but my first instinct would be to look that angel in the face and say “Yeah flipping right.” But what did Mary say?

Luke 1:38 Behold the maidservant of the Lord! Let it be to me according to your word.

In other words, she looked at it as an opportunity to serve her Lord, and said “okay, let’s do this”. How many of us look at scary opportunities that God puts in front of our faces that way? I know I personally question every last detail of requests from God.

Do any of these questions sound familiar?

But Mary obeyed, despite the ridicule I’m sure she faced. After she explains to people, who probably think she’s a nut case, that Gabriel came to her and that she’s carrying God’s child, God tells her to travel to Bethlehem. I looked up how long it takes to get from Nazareth (where Mary and Joseph lived) to Bethlehem on foot.

All I’m thinking is you couldn’t pay me to travel on foot literally about to give birth for thirty-three hours. Despite the crazy request, Mary obeyed.

THEN, to top it all off no one would let Mary and Joseph into their homes. So, to the barn they went. Mary is going to give birth, the kind of birth that all mothers go through mostly in hospital rooms with tons of doctors around them, in a barn with farm animals. I’m not a mother, but holy cow does that sound like the worst experience ever.

Let me sum this up.

BUT, despite these crazy circumstances, Mary obeyed. Now think about what God asks you to do in your life. Is He asking anything as insane as He asked Mary?

And let me mention Joseph while I’m at it. His wife comes to him and tells him this crazy story and request from God. No hesitation. They did it. They listened. They obeyed. And what kind of world would we live in if they wouldn’t have? Say goodbye to the New Testament.

We have no idea what God really has in store for us when He asks us to do things. Are we afraid to put faith in the unknown? Absolutely. Can you imagine how afraid Mary was? But it’s about trusting the bigger picture that God has planned and putting our complete faith in His requests. We don’t have to know the why yet. Did Mary understand why her? Nope, she just did it. We need to just do it. Trust in God’s plan. Feel blessed that he is asking YOU to do whatever it is he’s asking. He has specifically asked you to do this certain thing because you’re the perfect person for the task. He has given YOU the tools and knowledge to be the best person for the job. Shouldn’t we take pride in that? He has a purpose that is so much bigger than our understanding at the moment. Obey. Trust. Have faith. He is a good God and only wants the very BEST for you. No matter how scary, how far fetched, or how completely insane the request is from Him, know that He will give you everything you need to accomplish his tasks. He is right there with you. He wants you to trust in His big picture for your life and walk His walk to fulfill your divine purpose He’s created you for.